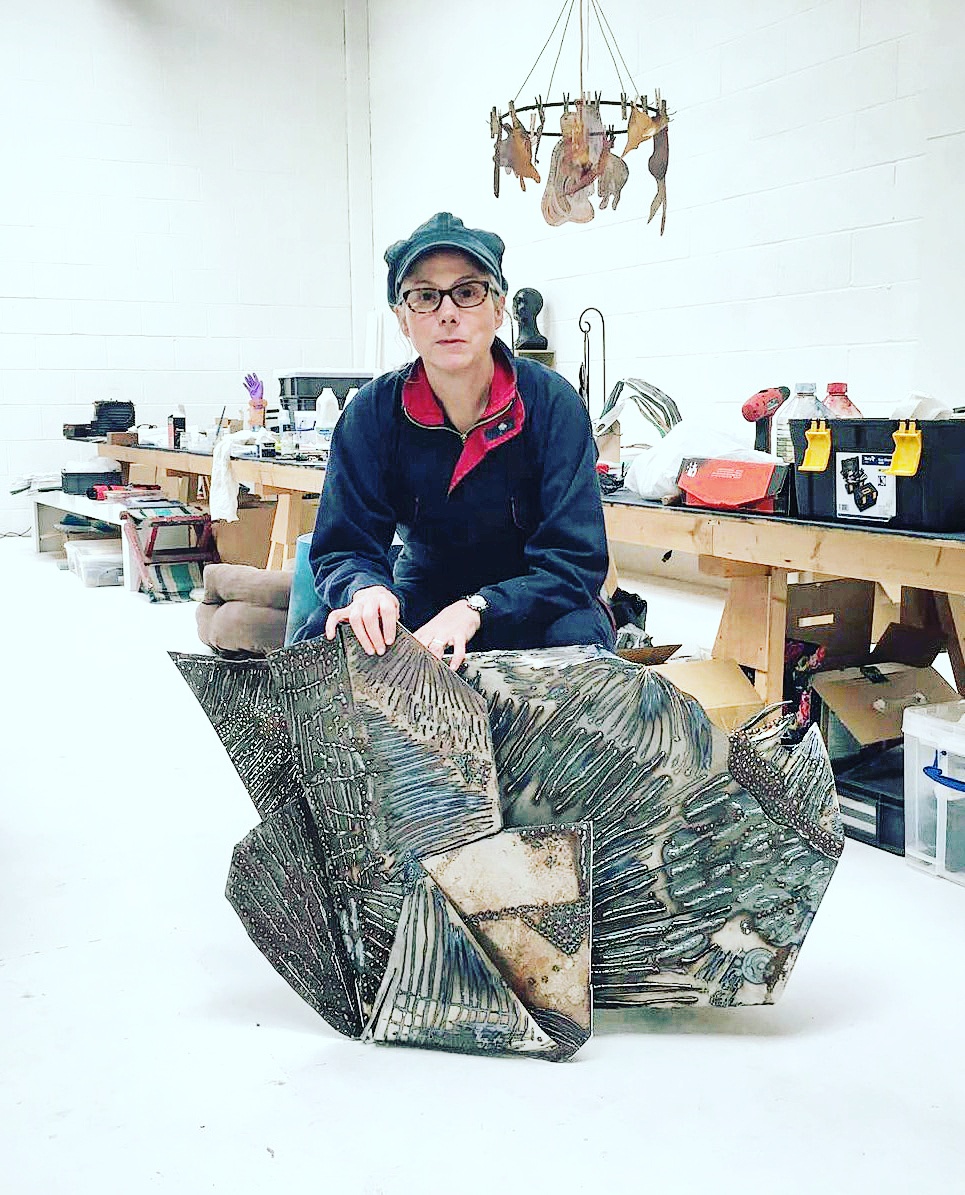 ‘ART IS OXYGEN’.
Melissa Aitken 2017
Melissa cannot live without making, and throughout the 80’s, 90’s, Noughties and now Twenty Tens that is exactly what Melissa has done. To stave off debilitating depression, anxiety and chronic pain she has always painted, drawn, taken tens of thousands of photographs and most importantly never stopped getting excited by the world around her, in fact, the hardest part is trying to calm her down and focus on one thing at a time. The making itself is always as important as the outcome. For Melissa, there is no such thing as a mistake. Having an open mind is key to being able to grow as an artist and move into new fields and disciplines. Melissa discovered metalwork by chance. Whilst studying for her master’s degree she broke her back and was unable to continue with her large-scale paintings and sought to find a way to continue making and complete her degree. She ordered some sheets of copper and began piercing and drawing into the malleable receptive material. She experimented extensively and was very pleased with her final piece; “Noose and Pillow” in 2011. There came a point where she realised her pointillism in copper needed to grow and knowledge more than just her normal instinctive way of working was going to be required. So, whilst searching for information on the internet, the marvels of the great spy Google sent links to an Open Day at Plumpton College in Sussex.  And this is where she has arrived at and what a journey it is proving to be. For her, it is an epiphany. A true love affair with metal crafting has begun. This Foundation Degree in Creative Metalworking at Plumpton College has opened doors to a new perception Melissa did not, and could not have comprehended. From the fumes of the forges (all 29) to the camaraderie of the students there is a beautiful yet tough ethereal quality that makes only for genuine creativity. For Melissa, the honesty of the materials and their possibilities are her next journey to undertake in her creative career.
She lives with her husband of 25 years in Haywards Heath, has two grown-up children and two very high maintenance dogs. She is a busy Director of a logistics company in the British manufacturing sector herself and her husband bought 12 years ago.
She envisages setting up an anti-misogyny movement called “Phallacy” in response to a college assignment at The Ditchling Museum of Art + Craft which celebrates the work of the Guild of St Dominic and St David that the infamous Artist Eric Gill (of GILL SANS font fame) set up in the early 20th century. To quote the man himself from an essay called “Trousers and The Most Precious Ornament” published n 1973 by Faber and Faber:

“The ‘civilised’ man and woman may think, from what I have written, that I am not merely an anti-feminist but a misogynist of a peculiarly vituperative kind. I shall not try to disabuse them – so little good would be done by the attempt.”

Truth be known, Melissa is a feminist with a capital F.